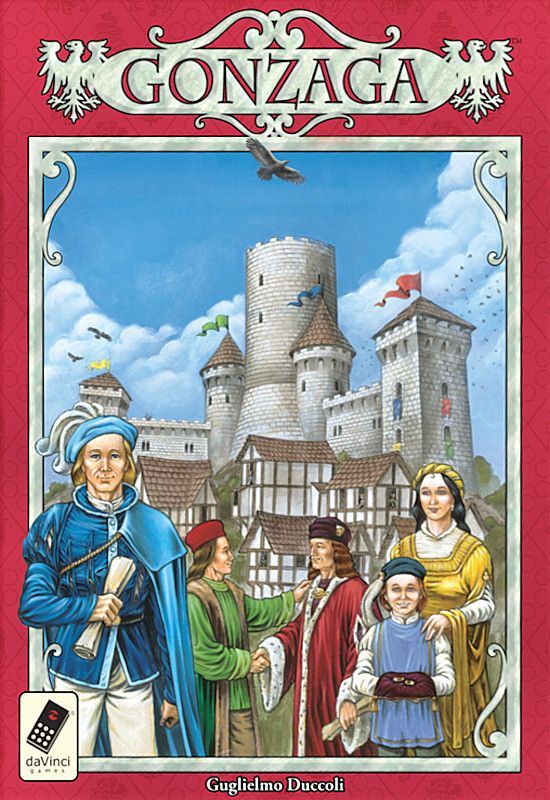 Description from BoardgameNews.com: The Gonzaga family ruled part of northern Italy for nearly five hundred years, losing control to the Hapsburgs from Austria in 1708. During their reign, two daughters of the House of Gonzaga married Holy Roman Emperors. In Gonzaga, players must get into the expansionist spirit of the times and build fiefdoms across Europe to stake a claim on harbors and cities, while also trying to complete secret missions. The game lasts 7-12 rounds, and players are competing in some of six regions in Europe. (The number of regions and the specific regions vary based on the number of players and the scenario tile drawn at the start of the game.) A round starts with each player drawing a fief card from their individual deck; each fief card depicts one of twelve fiefs: plastic components comprising multiple hexagonal loops with castles on some of these loops. Each player then secretly chooses both a region card and an action card, then reveals them simultaneously. Part of the fief (but not all of it) must lie in the chosen region, and the action card determines whether a player must play the fief on one or more harbors, on one or more cities, on open land, or on both harbors and cities. With this last action – the alliance card – a player can alternatively place one or two of six individual rings on the board, even on spaces that another player has already claimed with a fief. You score points for covering cities and harbors, for connecting at least three harbors in a sea, and for setting aside your fief as a donation to the church. The cards you play are set aside for the next turn, thereby forcing you to switch regions and actions as you place fiefs. The game ends either after twelve rounds or after a trigger point based on the cities and harbors not covered. The player with the most connected fiefs, including the individual rings, scores a bonus, then players reveal their hidden objectives and score based on the number of target cities they covered.

Sorry, we currently have no How To Play videos for Gonzaga.

Buy Gonzaga Board Game at the best price