Santorini the Board Game Review

History of Santorini the Board Game

Santorini is a board game that had its genesis, as so many do these days, on Kickstarter, back in 2016. The brainchild of Gavan Brown of Roxley Games in Canada, Santorini's Kickstarter campaign raised over 700,000 Canadian dollars from its 7,112 backers and recently has added an app version of the game to the many popular app stores.

What's in Santorini's board game box?

The board game box contains several different plastic components that make up the playing elements of the Santorini board game. These include:

All of these game items are of excellent quality, the tower sections all equally created and consistent and the board colourful and sturdy. the island board clips into the island base using four holes which match up with 4 tabs on the base plastic. The only gripe here is that the fit isn't quite spot on and so you have to ever so slight force the board onto the base; whilst a very small problem it's a shame as the game quality is otherwise excellent. 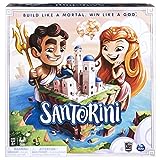 So... the basic premise of the game is you are trying to get one of your workers onto the 3rd floor a Santorini tower. If you do this you are the winner. To get up to that third level you need to build towers as you can only move up one level at a time, so you can't go from board-level straight to the third level.

Each player turn in Santorini is made up of two phases: move and build. You can move into any square adjacent to your one of your workers and then you can build onto any square adjacent to that worker (in its new position). As you and your opponent move and build the board slowly opens and there become both more places for workers to move up but also more opportunities for all players to get onto a third level and win the game so you are in a constant strategic struggle to both build around your own workers whilst keeping an eye on opponent's workers to ensure they don't move too far away and too far up the towers.

Each Santorini tower can be built up to 4 levels with the final level being a blue dome. Once the dome is placed that tower is complete and a worker cannot come onto the top of it. This is how you can stop someone from getting onto a third level and taking the win. A worker also cannot gt onto a level already occupied by another worker and as mentioned above they must move up a level in the right order: first, second and third however you may move a worker down from any level.

The basic game described above is played the first few times as you get to know how Santorini works. After that, you can introduce the God cards to the play and these bring additional special powers to the table to allow each player to perform and action each turn that gives them the ability to annoy and slow an opponent's progress or further boost their own. These cards add an extra level that takes the game into a more complex dimension, advanced from the basic rules and provide extra strategic complications that you need to consider before taking your turn.

The board game Santorini is a very satisfying board game, both in terms of what's in the board game box but also in terms of play. It is a game that can be played with 2 players perfectly well and you can end up in a form of 3D chess as you try to see a few moves ahead for yours and your opponent's moves to make sure you don't move in error and then find yourself too far away from them as they leap up to win.

Santorini plays for 2 players in around 20 minutes so it is a great game to take out and play for a quick bit of board game fun; setup is minimal and it gives a fun and friendly play.

The Board Game Box's verdict is an entertaining and delighful 3D chess play.